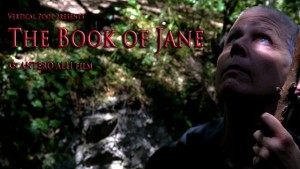 “The concepts raised in “The Book of Jane” are profound and often complex and provide evidence of the artistic and intellectual power that can be generated through underground filmmaking. It is also one of Alli’s crowning achievements.” – Phil Hall, film threat.com (5 stars)

Alice (Marianne Shine), a Professor of Comparative Religion, is writing a book exalting the ancient values of pre-Hellenic goddess mythologies. One day she meets Jane (Luna Olcott), an enigmatic older woman who roams the university campus, sleeps under a bridge, and rattles Alice with her disturbing insights. Alice is also a muse to her live-in partner Colette (Madeline H.D. Brown), an inspired artist who paints goddess portraits. When Colette hears about Jane, she encourages a reluctant Alice to invite her over for dinner. “The Book of Jane” is a powerful story of feminine initiation and transformation and, an unearthing of the buried histories of the nomadic homeless.