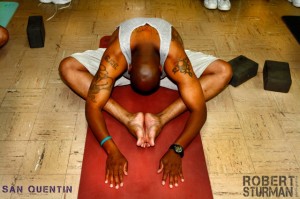 Fundraiser for the Prison Yoga Project, Suggested donation $25 per person

James Fox, founder and director of the Prison Yoga Project (PYP), will be hosting a fundraiser for his non-profit to help cover the cost for sending 2,000 copies of his book, Yoga A Path for Healing and Recovery, free-of-charge to prisoners who have recently requested it, as well as to raise funds to complete an instructional yoga video for prisoners filmed at San Quentin Prison.

Since the book was self-published in January 2010, over 7,000 copies have been sent to prisoners for free throughout the U.S. enabling them to have a self-guided yoga and meditation practice. After a recent announcement appeared in the Spring 2013 edition of a national newsletter for prisoners, over 2,000 requests have been received. Books have had to have been reprinted and PYP will need to raise $16,000 to cover anticipated costs for demand through the end of 2013. The dvd, which will have the same name as the book, will be sent to interested prisons throughout the country enabling them to provide yoga instruction for incarcerated men and women. It is hoped to be able to raise $10,000 to help cover development costs for the film and launch a promotional campaign to prisons.

The goal of the Prison Yoga Project is to expand the practice of yoga and meditation to prisons and rehabilitation facilities, and to provide training for yoga instructors interested in teaching to at-risk populations in prisons, residential rehabilitation facilities, and community programs.  Based on over 12 years of experience, we have learned that our specific yoga curriculum can help people shift unconscious behavioral patterns of reacting into conscious ways of responding, and that learning this fundamental behavioral shift can make the difference between committing a crime or not.