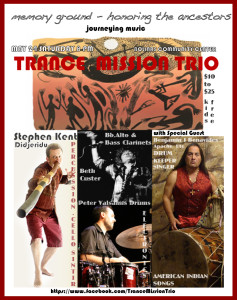 Trance Mission is world renowned band founded in 1991 by Stephen Kent and Beth Custer that performed extensively on west coast and in Europe during the 1990’s. Together they created four seminal recordings which were released on San Francisco’s City of Tribes label:Trance Mission, Meanwhile…,Head Light, and Day Out of Time charted on CMJ radio and Billboard and creating a buzz in the alternative music world.

Now reunited as Trance Mission Trio with drummer Peter Valsamis (who recorded with the band on their 4th CD Day out of Time) TMT creates gorgeous melodies, scintillating rhythms, and ecstatic drones. Don’t miss this evening of musicians at the top of their game: Stephen Kent, didgeridoo, cello, percussion Beth Custer, clarinets, voice, samples Peter Valsamis, drums, atmospherics With beginnings in Uganda, and the seed sown there of a lifetime of interest in global cultures, it is no surprise that Stephen Kent has traveled the world, living at various times in Africa, England, Spain, Australia and, for the last 15 years, The San Francisco Bay Area.  In Australia, in 1981, as Music Director of Circus Oz he first connected with Australian Aboriginal culture and the Didjeridu. 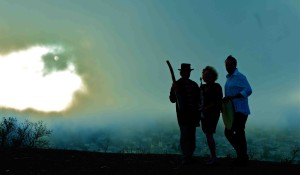 Inspired by the power of the land, and the support the group gave to Aboriginal issues, he learnt circular breathing and wrote music for brass instruments, sounding unmistakably like the Didjeridu. While he has always had great respect for Aboriginal people and their culture Stephen has never tried to imitate traditional styles on the Didjeridu. Instead he has pioneered his own unique style, with the Didj at the center of his many compositions in contemporary music.  Widely regarded as one of the pioneering innovators in the modern world of the Didj [Didge, Didjeridu Didgeridoo] he was a founder of the groups Trance Mission, Lights in a Fat City, Beasts of Paradise & Furious Pig and has made five solo CD’s, with more imminent releases concentrating on the Did forthcoming. A recurring presence throughout Stephen’s recording career from, Lights In a Fat City to Oil & Water has been producer Simon Tassano.   His new project, Living Labyrinths (Family Tree), a live recording, is a record of his first time meeting with a computer (programmed by Greg Kuhn) in Oakland’s Chapel of the Chimes, on the Summer Solstice.  This is the first of a new trilogy of solo Didjeridu releases Stephen is working on. Musical collaborations are at the heart of Stephen’s work some of his more recent collaborations include, artists as diverse as Tuvan throat singers Chirgilchin, Korean Samulnori Drummers, frame drum wizard Glen Velez, Japanese Taiko luminary Leonard Eto, Markus James & the Wassonrai, flute legend Paul Horn, Airto Moreira, multi-media group Magnetic Poets at the Torino Olympics, and vocalist Eda Maxym’s new band Imagination Club, in which he plays guitar & other instruments, as well as the didj. He also spent a day opening for His Holiness the Dalai Lama, at Stanford University. Past projects and collaborations of note include, Zap Mama, Habib Koite & Bamada,  Megadrums, Omar Sosa, Badi Assad, Herbie Hancock & Wayne Shorter, Steve Sheehan, Mino Cinelu, Michel Portal, Boukman Eksperyans,  and the legendary ex-Doors drummer, John Densmore, among many others.  He continues to perform all over the world.