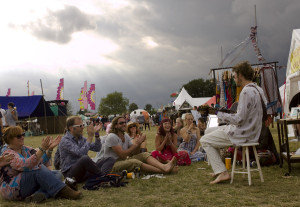 On Tuesday 9th July the Bolinas Community Center will play host to barefoot British troubadour Jont, whose songs have been featured on the TV show Grey’s Anatomy and the closing credits of the movie Wedding Crashers. This is a free show!

Inspired by the Vipassana meditation courses he has been (which are free and then you donate if it resonates) his new album Hello Halifax, his seventh, is currently free to download from his website (http://jontnet.com/lists/?p=subscribe) if you want to check out his stuff before the gig. Described by the blog Babysue as “soft folky moody pop” and by the UKs Q magazine as “music so lovely it makes you want to hug strangers in the street”, Jont has generally eschewed the mainstream music business arena in this lifetime, preferring to play small intimate gigs to people he can really engage with – be it on train station platforms, in homes and gardens or community centers.

He gained a name for himself a few years back when his travelling house party gig series, UNLIT, became an internet phenomenon and a large UK mobile phone company paid for him to tour the UK making movies of his events that he has described as “celebrations of generosity and openness”. Then after 15 years of making albums and pursuing an independent but traditional music business agenda (seeking radio play, cd sales and celebrity) he decided he wanted to be a troubadour for real, to set off in to the world with no plan, just a guitar and to tell the people he met he was letting his songs organically lead him round the world. The journey took him to Australia where he learnt to meditate and with the epiphany that ensued he was eventually led to work with the plant medicine Ayahuasca and to a Vipassana retreat in Occidental, CA over Christmas 2011. In the days after that he wrote a letter to an old friend and discovered he had an 8 year old daughter living in Halifax, Nova Scotia and moved there to be with her soon after, starting the next more grounded phase of his troubadour adventure.

In the spring of 2012, just before moving to Halifax, Jont came to Bolinas  and played a gig in the garden of Jerry Bojeste and immediately felt a strong bond with Jerry and also a strong connection with Bolinas. “I’ve been looking forward to coming back to Bolinas for a while, and am really excited to be doing one of the spiritual launches of my new album in to the ether of the coast I love the most in Bolinas….I can’t wait to sing for you all, tell some stories, and have a great night…”.

Support will come from a local favorite and singer that Jont met on his first trip to Bolinas, Sofi Rox.